We would like to share one of our many I-601A success stories. Our clients, who we will call Patrick and Adriana to protect their privacy, came to our office for a consultation earlier this year. We assessed their case and decided that they would be excellent candidates to apply for an I-601A waiver. We filed for their I-601A Waiver petition in February 2016 and we received their approval on August 2016.

Background
Adriana, a Mexican citizen, came to the United states in 2004. She entered without inspection in search of a better life for her and her children. She met her U.S. citizen husband Patrick in 2005 and they married in 2006.

After the passing of his wife, Patrick was a single father to his five children and also held a full time job causing his anxiety and panic attacks to become more frequent. When he met Adriana in 2005, she was like an answer to his prayers. Her kindness and generosity helped him get through his panic attacks and deal with his loss related psychological issues. Upon their marriage, Adriana took Patrick’s five children as her own. She gave up her job to take care of the children full time, allowing Patrick to focus on his job to support their large family. Adriana brought a balance to Patrick’s life—a financial and emotional balance.

Approach
Our first step after taking on this case was to establish and prove that if Adriana’s I-601a waiver were denied, Patrick (as the U.S. citizen spouse) would suffer extreme hardship. We immediately set out to gather and collect evidence to support our case.

We worked closely with Adriana and Patrick to collect medical records to establish that Patrick would suffer emotionally and psychologically if Adriana were not allowed to remain with him in the United States. We also collected and analyzed substantial financial documentation to prove the financial hardship to Patrick in the event that Adriana were forced to return to Mexico—this included evidence to prove the financial hardship Patrick would suffer if he were forced to either quit his job to take care of his five children or be forced to have to pay for the full time child care for all five children.

While this case had particularly good facts to support it and we were confident from the beginning that we would obtain a waiver, here at the Ranchod Law Group we also take on more challenging cases. We work closely with our clients to identify all potential hardships and present that best case possible.

Contact our office and we’ll analyze your case and walk you through the process so that you know your options. Call now (916) 613-3553 or email us at info@ranchodlaw.com.

A Detailed list of other information on I-601A Waivers

Disclaimer: The testimonials, case results and/or endorsements do not constitute a guarantee, warranty, or prediction regarding the outcome of your legal matter.

Want to join the discussion?
Feel free to contribute! 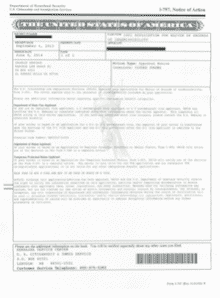